The most accidental issue that you can face with a floor jack is that your jack has air stuck in its system, and it can lead to some horrible accident. To avoid this issue, you just need to know how to bleed a floor jack.

Bleeding a floor jack is fairly an easy task, and anyone can do it if they try.

This article will guide you through all the processes and steps safely and properly.

6 Steps To Bleed A Floor Jack By Yourself

The first thing of bleeding a floor jack is making sure the floor is well-prepped beforehand. If the floor is dirty or has any small objects lying around, you will have a much more difficult time to bleed the jack.

Therefore, always place the jack on an even surface and remove any type of load it's taking.

Also, a common mistake that almost everyone makes is that they don't clean the surface of the floor jack. Dirt can easily get in the system when you open the floor jack, so make sure to clean the surroundings with the help of a wet but clean cloth.

Ram piston is the part that supports the load it's taking. It looks like a long shaft in the floor jack. First of all, you have to extend it.

Make sure doesn't have any weight on it and pump it. Continue to pump until the jack arm starts to hold up the saddle. Ensure it has reached the maximum point. Also, make sure you do it properly before moving on to the next step.

The two types of floor jacks are the expensive ones and the older or cheaper ones. Both use different ways to release the pressure, so make sure which one you have.

A good jack valve is opened with the help of a jack handle. You will need to move it in an anti-clock motion to be successful.

The cheaper valves are mainly located under the handle.

Then you will have to disregard the handle and re-adjust it for your released valve. 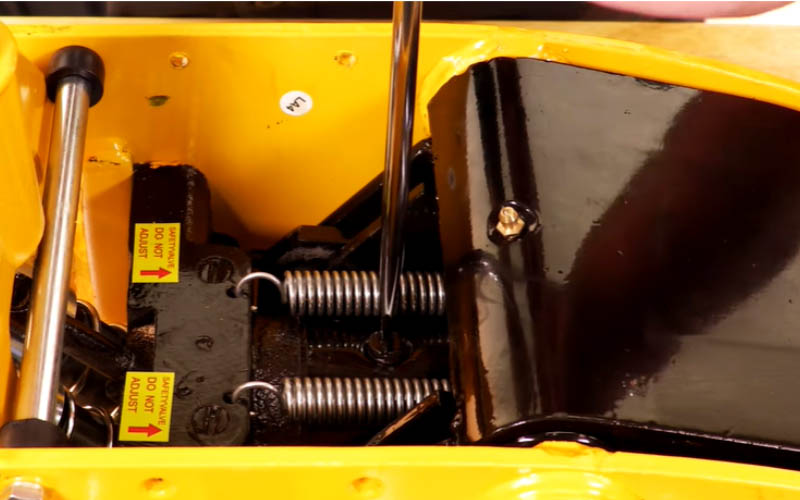 It will make the lifting arm return to its low point. Make sure the jack arm returns to its maximum low point before you move on.

First, you have to check the owner manual of the jack that you bought. Even if you don't have it, you can always search the jack's model on the web, and you will be able to find it easily. 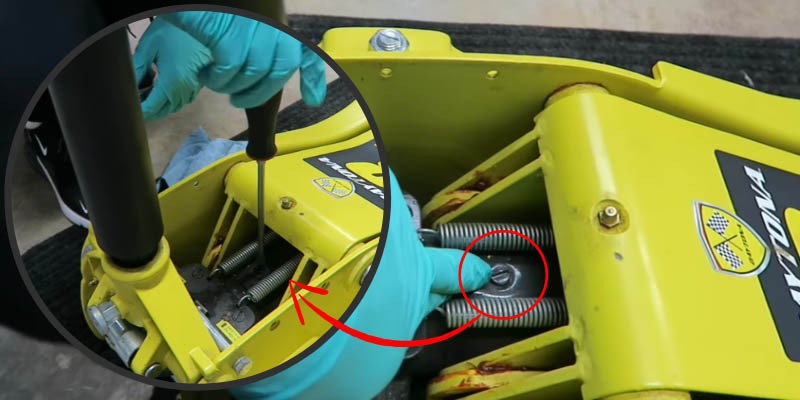 There you will be able to find the filler plug and use a screwdriver to turn it in the counter clock direction to remove it.

Once you remove the filler plug, the air trapped within will start to come out. You should be able to confirm this as you will hear the sound of the air getting out.

Wait until the hissing sound stops. It indicates that the air has fully come out. Then put back the filler plug carefully until it fits tightly. But don't overdo this, as you might end up damaging the valve.

After checking whether the filler plug is tightly closed, you have to close your release valve. Use a screwdriver in a clockwise motion to close the valve.

Step 6: Repeat the Whole Process to remove the air from jack

Now all you have to do is repeat the entire process. You have to do this again and again until all the air has been released from the floor jack.

It might take a few tries to bleed all the air from the floor jack, so don't be discouraged. Take it slow but keep a steady pace. This way, you won't be losing too much energy but will see the optimal result pretty soon.

And that's all. These are all the steps that you need to follow to ensure that you have successfully done the bleeding process with your floor jack.

Just make sure you get all the steps right!

Q-1: How To bleed A hydraulic floor jack?

You have to open the bleed valve by turning it in the anti-clockwise direction with a screwdriver.

After opening the valve, pump the handle at least 6 to 8 times. The jack should not rise up when you are pumping it; if it does, check the valve again to see if you have opened it correctly. Pumping the Handle will help push out the air from the system.

Then check again if it won't rise or gets jerky. If that happens, there is still some air left in the system. Follow the procedure and do it again. After you have successfully done that, put back the cover plate. This is how to bleed air out of a hydraulic floor jack.

Q-2: How Do You Fill And Bleed A Floor Jack?

Ans: First, you should know that you can only use hydraulic jack fluid/oil. Other fluid-like motor oil will compress when pressure is applied to it.

Start by opening the valve and filling it with hydraulic jack oil.

After filling, you have to close the valve. Use a screwdriver to turn in a clockwise direction to close it. Then pump the handle a few times to see if you hear any noise from the plug. That sound is the air that you bled in the system.

Follow the process again and make sure there is no more air coming out of the valve. Now you have successfully filled and bled a floor jack.

Q-3: Why Won't My Hydraulic Jack Pump Up?

Ans: A common reason for this could be that the tightness of the handle and release valve is incorrect. If the problem persists, the hydraulic system has malfunctioned, or you have put too much weight on it, leading to an overload.

Related: How To Adjust Safety Valve on Floor Jack

Bleeding a floor jack properly is an extremely important thing. If not done properly, it can lead to some horrible accidents. Make sure to do the whole process by following each step properly.

If you follow each step mentioned in this article, you will know exactly how to bleed a floor jack properly and safely by yourself.